Lower back pain is extremely common. The world health organization claims that up to 80% of the westernized population will suffer from it now and then. Also, that a massive 33% constantly struggle with lower back pain. Thankfully there IS a solution to these issues. We have solved numerous clients’ lower back pain at the clinic, with some slightly different, but evidence-based methods. Let’s look into it.

This is a simplified version of my first published version in Norwegian. If you want scientific proof, read my article on the case against anterior pelvic tilt as a common malady.

Whether the pain stems from muscular or spinal origins, I often find that there is a common ground with regards to cause. 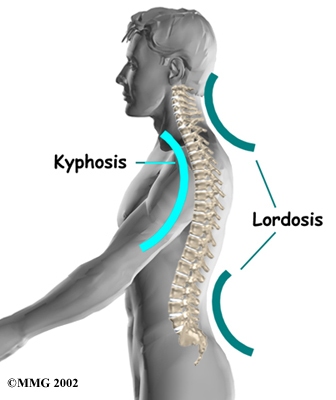 Actually, Moore et al., 2007 found that only 0.5-4% of herniations occur in the thoracic (neutrally kyphotic) spine, and that 95% of total disc herniations are in the L4-S1 region! Figure that. 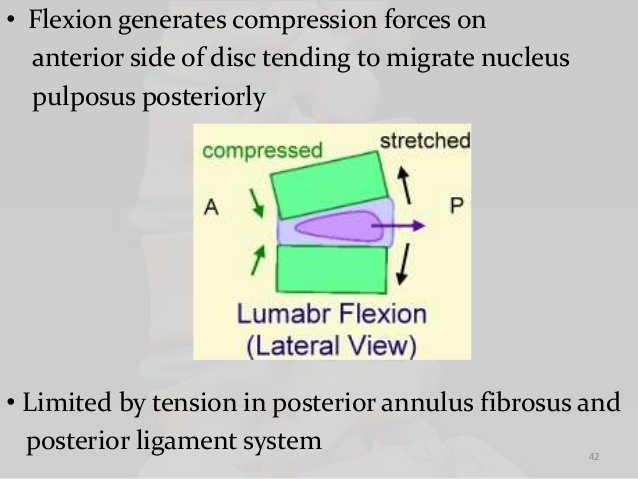 Secondly, more than 90% of herniations occur on the back side of the disc’s protective coating (annulus fibrosus), often into the nerve-root area. This indicates that the pressure came from the front side (just like squeezing an oreo, it’ll translate into the opposite side).

Thirdly, research (MRI cross section studies) show that the muscles that extend (arch) the lower back and stabilise it in lordotic alignment, are often found degenerated in lower back sufferers. Mainly the erector spinae, multifidus, posts, and quadratus lumborum muscles. The degenerative state of these muscles often correlate to the degree of the pain or injury the patient has.

Chronic low back pain caused atrophy of the paraspinal, isolated multifidus, quadratus lumborum, psoas, and the gluteus maximus muscles to varying degrees, which was most prominent in the multifidus. – Kamaz et al., 2007

So, do we see a pattern here? The neutrally arched regions are majorly the ones affected, the disc breaks due to anterior compression (forward bending), and the muscles that arch the back are atrophied!

There has to be a habit causing this chronic bending of the spine, ultimately weakening the muscles and causing the disc to protrude through the posterior coating of the disc! Yes, that’s exactly what’s going on! Posterior pelvic tilt. The most under diagnosed, unbalanced, and incredibly common postural strategy out there. 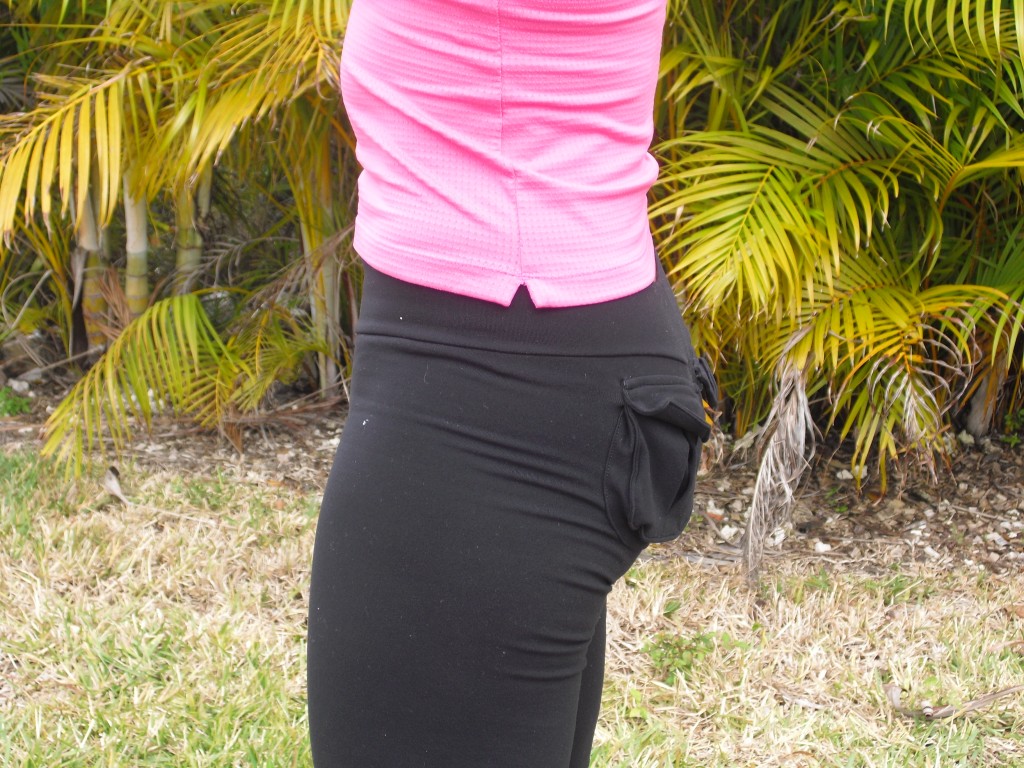 The back looks nice and straight, doesn’t it? Well, there is a problem with that, because the lower back should be arched, NOT straight / flat. The posture we see here, is causing constant unbalanced compression of the front side of the lumbar discs, especially the ones close to the pelvis (L4-S1). This is also why so many LBP sufferers experience a poor recovery, or not coming “back to normal” after a disc prolapse, as the root cause has not been corrected! In clinic, we find that almost all of our clients are in PPT.

As pelvic incidence, sacral slope, and lumbar lordosis indicating the parameters of lumbosacral sagittal alignments get smaller, the numbers of lumbar disc degenerations and herniated intervertebral discs increase. When pelvic incidence is below 45.6 degrees, it is more likely for degenerative changes of lumbar disc to affect more than three segments. – Lee et al., 2012

In the disc hernia group the patients had a relatively straight spine in the sagittal plane. The sacrum was more vertical, and the value of the lumbar lordosis was lower. – Rajnics et al. 2002

Many patients feel that they over-arch the lower back already, but are in fact just hinging backward on the middle back, the thoracolumbar junction. Remember, this is almost never where the injuries occurs! Sway back posture is often to blame; just have a look at this woman’s pelvic alignment. Notice that the pelvis and butt points downward just like in figure 3, but is hanging backward on the mid spine, creating the illusion of a lumbar lordosis (Osar, 2012). Some radiological studies confirm that LBP sufferers extend the upper lumbar and bend the lower lumbar simultaneously, like this woman in figure 4 is doing. 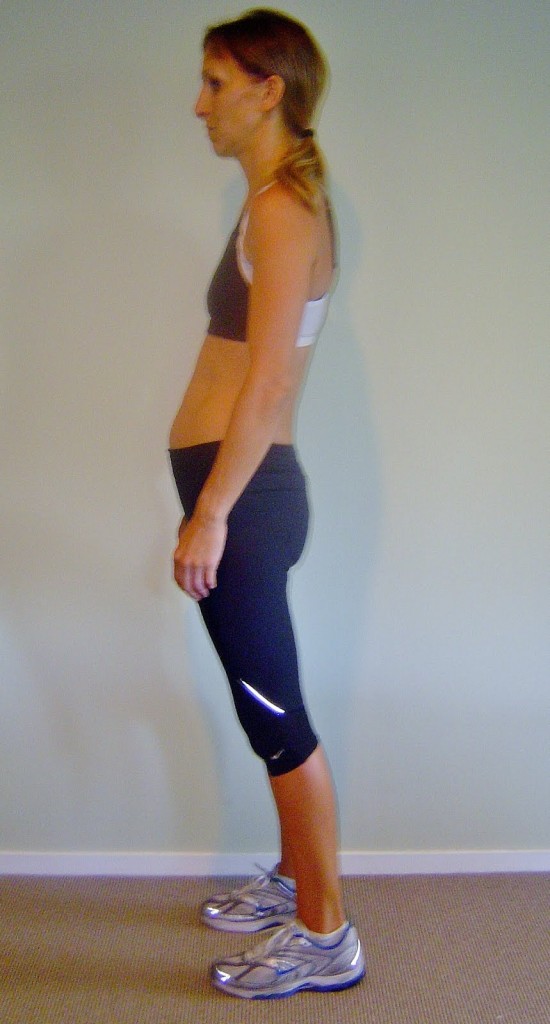 To identify the pelvic alignment without having to guess, as it takes some time of practice to identify it just by looking at it, you can measure the alignment between two pelvic structures. I learned this method from Dr. Evan Osar, a fantastic chiropractor residing in the US. These two structures are the ASIS and the pubic symphysis.

In a balanced pelvic alignment, the ASIS and pubis should be vertically aligned. In PPT, the pubis will be anterior (in front) of the ASIS. It shouldn’t be, as this leads to chronic misloading of the disc. The disc can handle a lot of beating when it’s being evenly pressured, but not when the compression is on one side, year after year, after year.

(Measuring ASIS to PSIS horizontally, or T12 to PSIS vertically, are NOT reliable methods – they do NOT represent true neutral!) 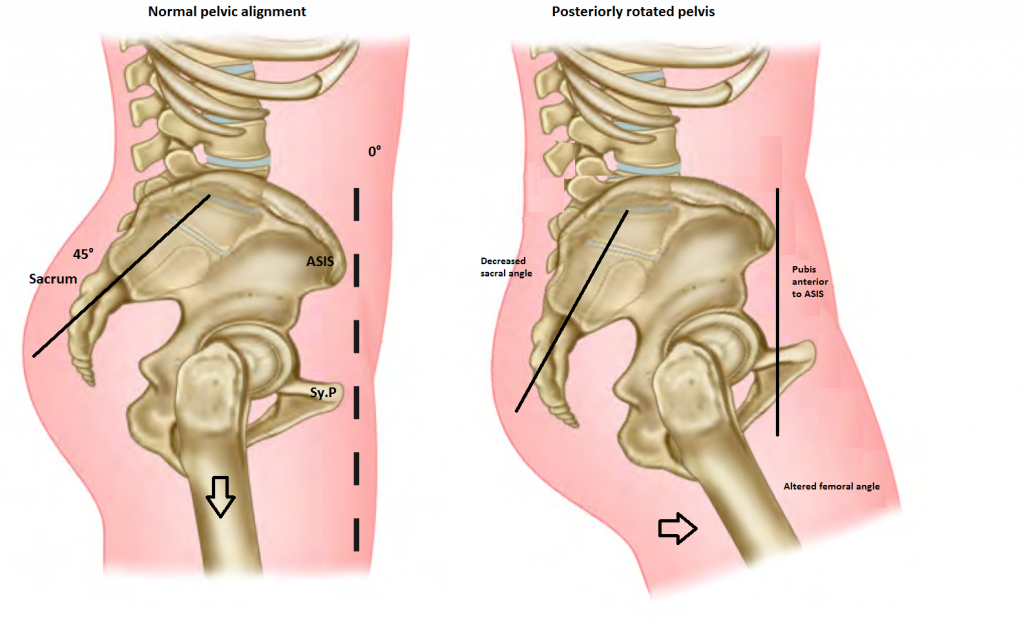 So, how do you correct it? SIMPLE! But not easy.

Pull the pelvis “back and up” so that the butt points out/up and not down. Do so until the ASIS and pubis are in vertical alignment, then have the patient stay there. In posture, in movement, in training; stay there. It’ll distribute load evenly on the discs in the spine, and they will no longer overload and break. The pelvis should not be anterior (vertically) to the shoulders, which means that if the patients is in swayback posture, they also have to relocalise the pelvis itself, more backward. When the pelvis is aligned properly, the lower back (lowmost, lumbosacral) extensors should also be palpably active in posture. If they aren’t, place pubis slightly (more) posterior to the ASIS.

Establishing proper alignment will be tough. It feels weird, you’ll feel tired, it will often HURT as well, as balancing the disc loading will now also load the injured (posterior) side of the disc. This will pass in a few weeks, so man/woman up and deal with it. 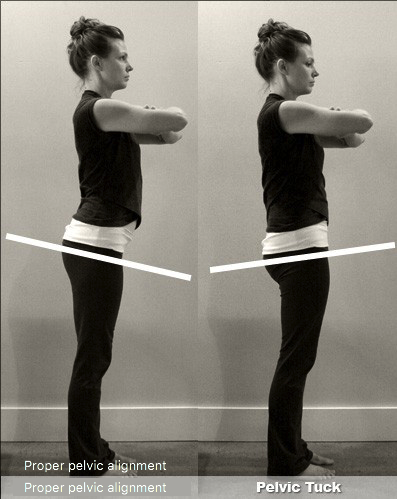 It’s that simple. Kind of. And yes, it should be that arched – trust me. And if you think this method is too easy to be true, try it; you’ll realise it’s a very hard job to reverse this postural dysfunction in practice. You’ll also realize how weak that lower back really is. As I said, “simple but not easy”.

The affected muscles, whom are extensors of the lumbar spine, will of course weaken when the low back is in constant flexion; they aren’t being stimulated. This will usually be reversed when the spine is aligned, over time. But, to speed up this process, it’s very beneficial to train them with specific exercises as well.

The quadratus lumborum (QL) muscles are especially prone to injury, and can cause devastating pain in the lower back; often localised on one or both sides of the spine. Starting the rehab process will often reproduce the pain, as the muscles are very weak. This is a part of the process, so be patient.

It’s important to understand that no amount of “strengthening” can undo a habit. Train lower back day and night if you will; it will not reverse posterior pelvic tilt. Postural/habitual changes must occur first by awareness, and exercises are then used to supplement and support this habitual change.

You’ll find videos for the QLs, psoas, erector spinae and multifidus in my video library or on my youtube channel.

An important contraindication to arching your back

Patients with symptomatic foraminal stenosis should not increase the arch in their backs until a foraminotomy has been done. Foraminal stenosis means that arthritis is filling the root exit, and because the volume of the root outlet narrows with extension and improves with flexion, extension (arching) is contraindicated in this patient group. Beware that this problem is grossly underreported in radiology reports. 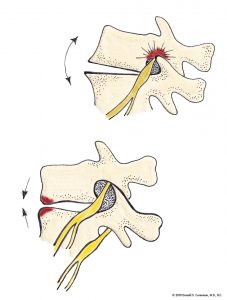 Patients with foraminal stenosis will feel better when leaning forward but have increased radiculopathic pain (shooting or radiating pains, or sometimes just increased back pain) when arching back, standing and walking, sleeping with their legs straight or on their stomachs. If your MRI report says there’s no foraminal stenosis, but you have these triggers, get a second opinion by a neurosurgeon rather than another radiologist’s opinion. This problem is not well appreciated in the axial plane on MRI and should be evalauted in the sagittal plane on T2w MR sequences, preferably with fine slice thickness. Patients with aggressive foraminal stenosis will have a positive Lasegue’s or reverse Lasegue’s test only when in lumbosacral extension. Likewise, myotomal weakness may be noted after provocative low back extension, but is normal after being situated in neutral position for some minutes. 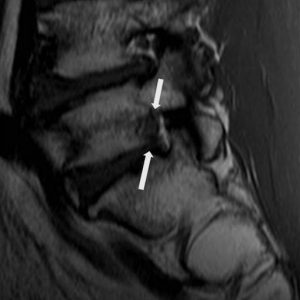 It is also very important to learn to incorporate proper pelvic alignment into your training.

Although it’s very popular to “squeeze the glutes” on the top, most people can not do this without going into posterior pelvic tilt. This is because their posture does not allow them to utilize their lower back and glutes simultaneously, in an effective manner. A better strategy is to focus on tightening that lower back, and maintaining the optimal arch in the same area; this will allow the spinal structures to load properly, in a way that does not cause malcompression and injuries. It will also cause optimal stimulus of the muscles that extend the lumbosacral spine, which have long been dormant. 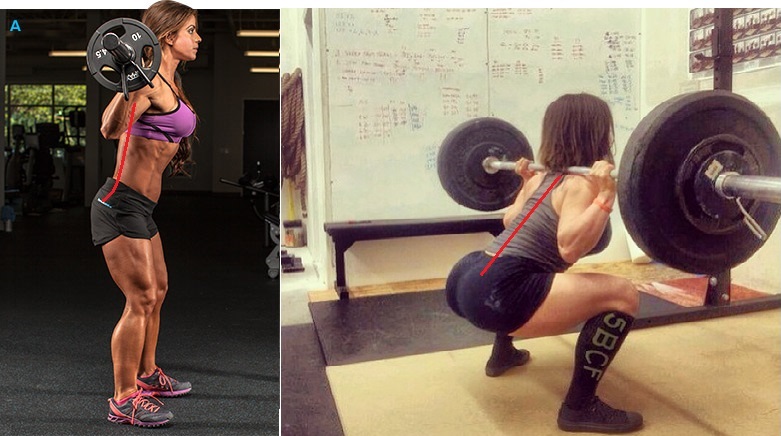 Figure nine illustrates very, very common mistakes that are missed by most therapists and trainers. The lower back appears straight, but the pelvis isn’t accounted for – It should be on line with the lower back, as seen in figure eight, to the right. All of these pictures come from a “how-to”-blog, which once again shows that the pelvis is a forgotten structure that most people do not know how to assess.

The main indication of pelvic misalignment is when the butt points downward in relation to the spine. By palpating the transition between pelvis and spine, you’ll want to feel that the posterior iliac spine is symmetrical with the spinal direction / angle.

lower back pain is usually caused by habitual flexion of the spine. This postural strategy is so common in the westernised society that you probably won’t believe it. More than 95% of our clients are in PPT, as I mentioned already.

Posterior pelvic tilt causes flattening of the proper lower back spinal curvature. In turn this leads to misloading of the discs (anterior compression), disc herniations, inhibition (inactivation) of the lumbar extensors, and other chain reactions such as forward head posture, which I will not address in this simplified article.

It is simple to correct, by aligning the ASIS and pubic symphysis vertically, pelvis vertical to shoulders, and staying there. Learn to stand, move and train with proper pelvic alignment! It has given a “new back” and “new life” to several of our clients. Your body will thank you greatly, after it has gotten used to it.

Kjetil Larsen is a Researcher and a injury rehabilitation specialist, and is the owner of MSK Neurology. He specializes in the treatment of chronic pain and has developed several distinctive protocols both with regards to diagnosis and conservative rehabilitation of difficult conditions. Kjetil has also published several peer-reviewed studies on musculoskeletal and neurological topics.

19 thoughts on “The true solution for your lower back pain”